How is a Machine Screw Made?

The demand for screws is showing no signs of slowing - but where did they come from, and how are they made?

The world consumes fasteners at an amazing rate. Over 2.5 million fasteners go into every Boeing 747, and as science and technology burgeons, so too does the world's demand for threaded fasteners. The manufacture process for screws evolves continuously in an effort to stay fast, efficient, and ahead of the curve; but at its core, the process of screw manufacture has changed little over the past 300 years. Screws can be designed with innumerable permutations, including specialist head and drive types, fine pitches, coarse pitches, right or left-handed threads, and flat tips or gimlet points to name but a few. Specific steps in the manufacture processes can be as varied as screws themselves, but in the modern world, fastener manufacture generally can be broken into two techniques which differ in the machining used to form the threads: thread rolled screws and thread cut screws. 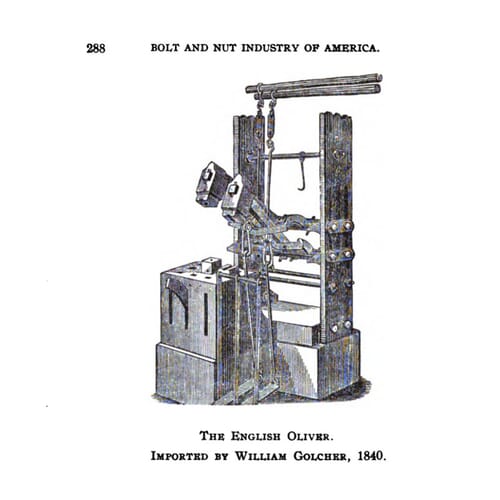 The earliest metal machine screws were a breakthrough in contemporary engineering. The innovation added helical teeth to the tried-and-tested nail formula, and created an unrivalled industrial fastener. Screws were particularly popular in gun making, for their ability to resist loosening under the vibrations encountered during gunfire. In comparison, components such as nails could (and would) simply drop out after a period of use, causing a gun to misfire or even fall apart mid-battle. Early screws were manufactured from nails, and laboriously carved by hand. This production method meant that production was slow, quality was poor, and no two screws were ever identical.

With screws in high demand, inventors from across Europe tried their hands at creating contraptions to mechanise the screw manufacture process. These efforts led to the development of a machine by Job and William Wyatt in 1760, which could autonomously cut around 10 uniform screws per minute. While many specialised screw lathes were developed by individual screw makers throughout the 18th century, the Wyatt brothers’ screw cutter is widely regarded as one of the very first examples of automated mass production. Since the 1700s, fastener design and production has seen significant advancements, and has been continually development to improve the versatility, quality and efficiency of fastener production.

For those interested in more information about the history of screw making machines we recommend this book on the subject which offers a selection of technical drawings and schematics showing old machines: History Of The Bolt And Nut Industry

Different manufacturing standards are used to specify different areas of the screw, which makes almost every screw a modular combination of different features. For instance, a metric thread size and pitch is defined by ISO 261, but a countersunk head on the same screw would be defined by another standard, such as ISO 10642 - hexagon socket countersunk screws, the material of this screw may be defined by ISO 3506. Multiple standards are used to define the attributes of any screw, and can define anything, including thread size, head type, drive type, material and finish.

Almost all screws start their life as either bar stock or one continuous spool of metal wire. Spooled wire is used for smaller sizes as it is easier to transport and can be continuously fed into a machine, but for significantly larger sizes, screws must be cut from solid bar. The spool of wire is lubricated and heated to increase workability, and is fed into a straightening machine to ensure that there is no misalignment in the final product. Once straightened, the wire is cut to a desired length, and a series of dies are used to progressively punch an outline of the screw’s head shape, and create a chamfer at the tip of the screw. This step is known as cold forming, and produces a ‘blank’ - a smooth, featureless template of a screw, with no threads and no drive cut into the head.

The manufacture process of a screw drive depends on the type of head and drive. For certain drives and driveless head types, this step is not needed, as it is performed during cold forming. For a common slotted drive and certain Phillips drives, the groove is cut by a secondary process.

Screw blanks are then fed into thread-rolling dies, which can form a screw thread in a number of ways. The most common method is a reciprocating die, in which the screw is rolled at extremely high pressure between two flat dies – one of which remains stationary. This process imprints the thread onto the screw, and can produce hundreds of screws per minute. Additional methods include cylindrical dies, where a screw is fed into a pair (or trio) of cylindrical dies which rotate in a fixed position, or rotary planetary dies, where several cylindrical dies roll around a stationary screw. Screws produced by thread rolling are far superior to machine-cut screws, as the blank is not cut during manufacture, but is compacted and strengthening by the dies. Accu’s thread-rolled screws have a superior finish, increased surface hardness, create less waste, are more accurate, and are significantly faster to produce than machine-cut alternatives.

For lower volume custom screw production, cutting the shank and then the threads into bar stock material can offer a more economical way to produce custom fasteners. There is a trade off with this technique - typically the threads are 30% weaker than using the rolled technique but when short runs of bespoke screws are needed this is an alternative worth considering. This technique also offers some interesting possibilities in terms of using precision cnc lathes to brand fasteners with tiny patterns and logos.

After manufacture, a batch sample is selected for inspection, to ensure that all products have been manufactured to specification. Digital metrology equipment is used to ensure that all components adhere to Accu’s +0.13/-0.13mm general tolerance on all dimensions. Due to their unique thread-rolling process, rolled screw threads are measured against an even tighter standard of +0.00/-0.13mm, as precision rolled threads should never be oversized. For more information on thread tolerances - please see this article: Understanding ISO Metric Thread Tolerances

We've curated a selection of videos from YouTube which show a range of techniques for the manufacture of machine screws. This video shows the  cold forged head & subsequent thread rolling process.

This video shows the much lower volume technique of making a screw on a manual lathe:

We hope you enjoyed this article - if you have any questions please post a comment and we'd be delighted to help.