What is The Difference Between A Screw And A Bolt?

Ask any engineer the difference between a screw and a bolt, and they will likely be able to give you an answer, ask another, and they will likely tell you something completely different. The bottom line is that there is no universal distinction between what constitutes a screw and a bolt. No distinction is perfect; new fasteners have been independently designed and manufactured according to contradicting definitions for almost 400 years, which has led to numerous exceptions to almost every existing rule.

Generally, Accu defines a bolt as a fastener which is turned from outside the head, and a screw as a fastener with a central drive. However, what constitutes a screw or a bolt can vary dependent on time period, geographical location, and even just manufacturer preference; the invention of criteria-defying hybrids further complicates the identification process, creating a muddled sense of distinction. Why do we need to know the difference?

Being able to distinguish bolts from screws is important for several reasons. Product design, manufacture, and maintenance all require the ability to identify specific components without ambiguity. Knowing the difference between the two is particularly important in cooperation between engineers and purchasing departments, where the former relies on the latter to follow instructions to the letter. In more recent times, knowing the exact terminology for a component has also become crucial in finding the correct components online.

How many distinctions between Screws and Bolts are there?

The following distinctions are roughly in order of popularity and significance. The US legal definition is paramount, particularly for those living in the US, but is not without its drawbacks.

Screws and bolts are distinguished by different users in the following ways:

'A bolt is an externally threaded fastener designed for insertion through the holes in assembled parts, and is normally intended to be tightened or released by torquing a nut.'

'A screw is an externally threaded fastener capable of being inserted into holes in assembled parts, of mating with a preformed internal thread or forming its own thread, and of being tightened or released by torquing the head.'

This definition relates to the bolt’s application, and is borrowed directly from The Machinery’s Handbook, an authority on mechanical engineering processes for over 100 years. The problem with this definition is that it depends more on the application than the attributes of the component itself - under the right circumstances, either component could be considered a bolt or a screw. In these situations, a secondary differentiation is given, and the tolerances of the fastener are used to determine its type.

Under the secondary criteria, screws are described as having a 'fine tolerance', whereas bolts have a 'coarse tolerance'. This definition is far from perfect, as in this context, the terms 'fine' and 'coarse' refer to the quality of the screw, but 'coarse' and 'fine' threads already have specific definitions in mechanical engineering. While useful from a legal standpoint, it is clear that this distinction was created for the benefit of customs regulation, rather than to be used by engineers. This definition is also only relevant within the US. Ultimately, the US legal definition of screws and bolts is a flawed, yet necessary distinction, but several more helpful alternatives do exist. 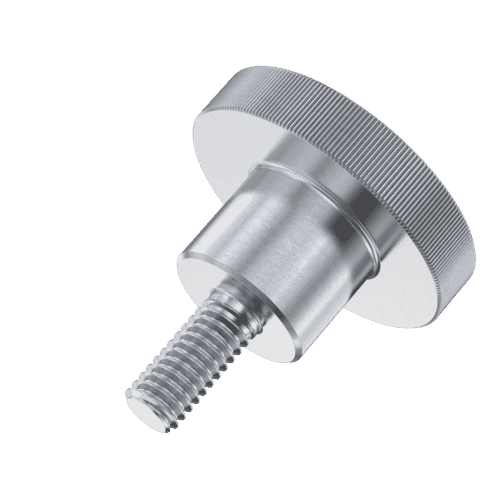 One general distinction between a screw and a bolt is that bolts are driven from the outside of the head, whereas screws are operated by a central drive. This is primarily due to the fact that greater torque can be exerted on the outside edges of a larger head diameter, as a wider head provides a greater distance from the axis of rotation.

One problem with this definition is that it is sometimes difficult to define components which incorporate features of both type, such as slotted hexagon bolts, which have both a drive, and an externally driven head - in these situations, technical distinction and identification of the dominant characteristic becomes somewhat arbitrary.

Another key difference is that bolts are generally used in conjunction with unthreaded holes and secured using nuts, but screws are fastened directly into a threaded hole. This is somewhat of a simplified version of the US legal definition, and has all of the same pitfalls - there is nothing to stop a screw from being used alongside a nut, or a bolt being used with a threaded hole to miraculously change its definition. Some argue that a screw is any threaded object which is installed by turning - by this definition, all bolts are screws, but not all screws are bolts. This description can be supported by contraptions such as screw presses for olive oil and wine, or the Archimedes screw, both of which existed long before screws were used as fasteners. In this context, a ‘screw’ refers not to the head type or application of a fastener, but to the presence of a rotating helical shaft. If this definition is used, then all threaded fasteners fall under the archetypal definition of screws, with a bolt simply being a subtype of screw.

With that being said, this definition still leaves some vagueness as to what specifically makes a bolt different to a screw.

Interestingly, the term ‘bolt’ has also existed long before the invention of fasteners. For instance, the bolt of a lock, a crossbow bolt, or in a more modern example, the bolt of a rifle, all of which refer to objects which are not threaded at all. Some of the earliest screws were referred to as ‘screw bolts’, which may be slightly confusing, but does shed some light on the origins of the term. Historically, a ‘screw bolt’ would have referred to a smooth shaft, contemporarily known as a ‘bolt’, with the addition of a helical ‘screw’.

In the examples above, a bolt has historically referred to a smooth, sliding shaft, so it is not unreasonable to see how some users define a bolt as being partially threaded.

Thread length is a relatively rare, but not unheard of distinction between bolts and screws - some users argue that a fastener which is fully threaded is classed as a screw, whereas any fastener with an unthreaded shank is a bolt. Examples of this are commonly found with countersunk screws, of which the partially threaded versions are referred to as bolts by some users. Another example would be partially and fully threaded hexagon bolts, with the latter being occasionally known as a set screw.

This distinction between screws and bolts is not particularly popular, and is easily contradicted, but is still encountered on occasion.

Imperial standard ASME B18.2.1-2010, which defines the dimensions of many imperial hexagon bolts, specifically claims that ‘bolts need not be pointed. Products designated as screws, with the exception of lag screws, are required to have a chamfered point’. As imperial screws are slowly phased out of modern engineering projects, this definition is becoming less and less prevalent. This standard doesn’t necessarily define what makes a screw a screw, but it does define that anything with a completely flat tip is either a bolt, or out-of-spec.

The problem with using this distinction is that it must be identified just how much of a taper qualifies as a taper. Almost all modern fasteners have a slight taper caused by deburring, which is also essential for ensuring smooth location. Products such as machine screws, which have a flat tip by design, are commonly chamfered to the same degree as an equivalent bolt.

Although very much an oversimplified view, bolts are often manufactured in larger sizes than screws, as a larger size lends itself well to their bulkier, more heavy-duty construction. For this reason, some users would simply know a small fastener as a screw, and a larger fastener as a bolt. Despite this use, size does not generally factor into the distinction between bolts and screws, and is more a byproduct of their design.

As previously mentioned, there is no concrete distinction between screws and bolts, and so many varying distinctions cause numerous contradictions. Sometimes, a screw or bolt may encompass shared qualities between a screw and a bolt, which can cause issues in definition. For instance, a self tapping bolt, which is turned from outside the head, like a bolt, but drives directly into a substrate like a screw, or a slotted thumb screw, which has both an internal and external drive.

The problem lies in the fact that the uses of these fasteners can, and often do, overlap. There is nothing to say that a screw cannot be used alongside a bolt, or that a bolt cannot be used in a blind hole. Reasons for deviation can range from accidental inclusion to deliberate innovative design.

The best way to avoid confusion is to avoid guesswork, and refer to product specifications. Many components are manufactured according to strict manufacturing standards, which clearly define specific component dimensions such as head type, thread type, and thread length.