Who are the students behind Southampton University’s Formula Student Racing Team?

The Southampton University Formula Student Team (SUFST) comprises over 200 students predominantly studying engineering, from a range of specialised disciplines, who come together to design and manufacture a single seater racing car each year. They compete annually against other Universities in Formula Student Competitions, testing the team’s knowledge and the vehicle.

How has Southampton University Formula Student Team developed over time?

SUFST has existed since 2012 in its current guise, having previously been a group design project. Members showed grit in early years to persevere against the struggles of setting up a new society. The growth and increased support of SUFST has led to continuous improvements; each year they have seen an increase in the number of points gained in the IMechE Formula Student competition. The team has competed internationally as well with their first endurance finish occuring in Hungary in 2018, and a strong showing in the Czech Republic in 2019, when they also raced in Germany too.

SUFST operates as an open society, meaning anyone can join, which presents a unique set of management challenges. Typically over 200 students register for the society, so it is important to have a committee to lead the groups and then to ensure as many people end up in departments that suit their skill sets, so they can have the best experiences and contribute to the project. 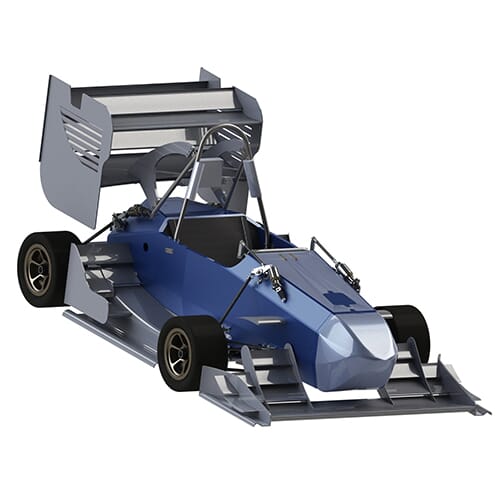 Balraj Basra, Team Leader for SUFST, explained how the team recently adjusted their setup. “We used the COVID-19 pandemic to reset our structure, moving away from atypical ‘car’ based departments such as chassis, electronics, suspension and aerodynamics. Instead, we opted for a ‘skill’ based setup, to distinguish theoretical, code, design, test, and organisational skills. This led to 5 departments called Vehicle Performance, Aerodynamics, Structural Design, Electronics, and Operations.”

The team has produced combustion vehicles since its inception, however in late 2019 a project to transition to electric vehicles was conceived. “The pandemic in fact allowed the team to accelerate this goal as concept development and design time could be focussed on the electric vehicle, rather than needing to design a new vehicle to compete in 2020”, Balraj adds.

As the use of a vehicle that had competed in a previous year was permitted, SUFST opted to go down this route. A two-year design cycle for the electric vehicle meant reduced pressure on deadlines and allowed for deeper research and development, and in 2022 it will permit more test time before competing in the summer. 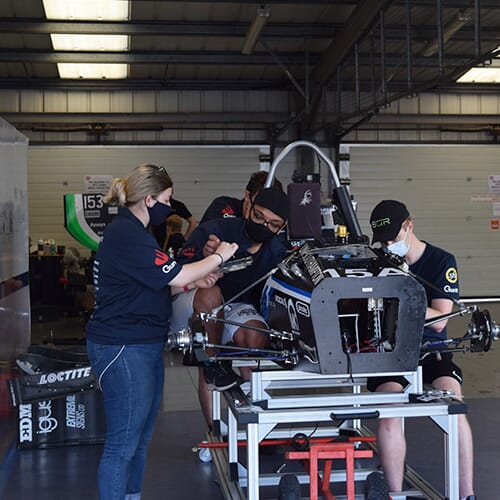 Of course, despite being able to restructure and maximise the efficiency of the team, thanks in part to the additional time over the COVID-19 pandemic, SUFST faced the same limitations many of us endured. Balraj comments that “transitioning to an entirely online setup proved a challenge and required flexibility to find what worked best.” Access to the workshops was limited by the lockdowns, resulting in limitations to the number of people allowed on-site to work on car build.

A clear plan and daily goals were set to ensure efficiency in the build to be ready for the competition. To explain further, Balraj added “we were limited to 6 people in labs at any one time during set hours. This was a huge drop from being essentially unlimited, where we regularly had 20 or more working through a day. We combatted this by setting our daily targets to ensure the 6 on-site were as efficient as could be. They regularly had calls with their respective departments while in labs, so we had a ‘virtual’ workforce supporting as much as they could.”

Securing partnerships and sponsorships with key component suppliers like Accu

A key method for the team to ensure smooth design and manufacturing of the car is to work with high quality suppliers. A core role of the Operations department is to seek out companies to form partnerships with, as the team operates to a budget. Anokh Vithayathil, a graduate from SUFST added “The engineers are keen and produce plenty of good designs, but sometimes it can be quite expensive to realise them.”

“It’s important to really carefully think about trade-offs and cost vs performance and also how long certain parts are going to take to be made or sourced” he added. Partnerships with companies can help to expand what is possible. This is how a relationship between SUFST and Accu was born as the team chose Accu after finding their online store. The team liked the layout of the site and the smart search functionality, finding the parts they needed with ease.

The range of components on offer from Accu meant that multiple departments could utilise parts from a single supplier, with the depth of each product range opening up design options for the team. For example, parts could be sized up for each project more freely, secure in the knowledge that a fastener to suit the designs could be found via Accu’s website.

Choosing the right components for the car build 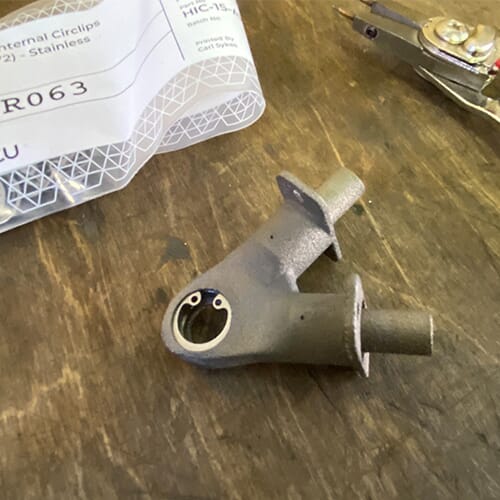 Through their continued sponsorship, this academic year (2020-21) SUFST purchased components from Accu for nearly every department. A unique part found by the team was the Internal Circlips on offer. Wahaj Saif, Chief Engineer, explained “We use an innovative and lightweight carbon fibre suspension, with carbon tubes bonded into a titanium additive manufactured insert. A bearing is pressed into the insert to allow it to move as the car goes over bumps.” Circlips were used to secure the bearing into the insert, however in previous years these were not as reliable due to External Circlips being used. Wahaj added “Internal Circlips however sat flush within the grooves, reducing risk of them ever popping out.” 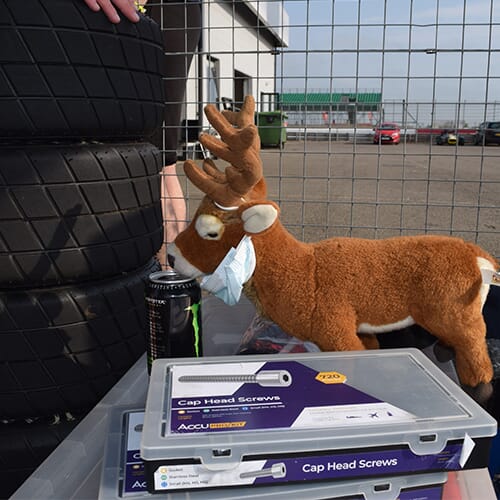 Accu’s Fastener Kits provided a range of stainless steel bolt sizes for use in Structural Design and the Aerodynamics package. These Stainless Steel Screw Kits were also highly portable in their cases which meant spares of all the bolts sizes needed were available for use across the car, even on the go. Balraj mentioned “We found them so useful, we ended up purchasing additional screw kits from Accu for the competition itself, meaning bolts were always on hand if needed and time was not wasted searching for a specific size. They were so handy that I would personally recommend them for any projects we’ve carried out at university.”

Cooling pipework for the engine used p-clips throughout ensuring no loose fittings from which fluid would leak, risking the engine overheating. Wahaj highlighted a key test the car goes under, where these components proved their worth; “this is also imperative as the car is tilt tested at competition, where it is tipped at an angle, to check for leaks. A failure here would delay the team passing scrutineering checks.” 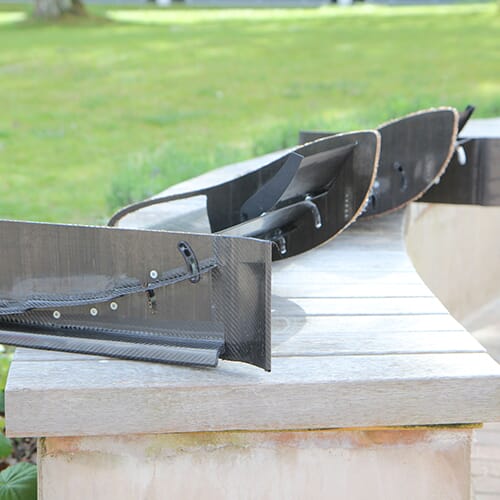 For the Aerodynamics package specifically, Socket Countersunk Screws were used. Anokh explained the reasoning behind this choice was made in the design concept, commenting “the aerofoils that make up the wing consist of a sheet of carbon featuring graphite filled nylon with a captive nut. Accu screws are threaded into a nylon insert and fasten the aerofoil plates to the end caps.”

Finding the right tools for each job from a reliable supplier

Tools are essential to provide good finishing of parts, and secure assembly. A range of handheld tools were purchased from Accu, including Deburring Tools. Evan Nichol, the incoming Technical Director said “these will be used for finishing of metal fabricated parts, removing sharp edges, and providing a lead-in chamfer on holes so bolts won’t snag on excess material.”

iFixit Toolkits were also a new addition to the team’s toolsets. Evan explained the motivation for acquiring these, “Members had previously used iFixit repair tools on personal devices, such as laptops and phones, and felt they would be very handy for electronics assembly across the car.” The convenience of having all tools arranged in a kit, specifically the Manta Driver Kit, was again invaluable for the portability when working around the car and provided order, meaning the correct size tool was never far away. 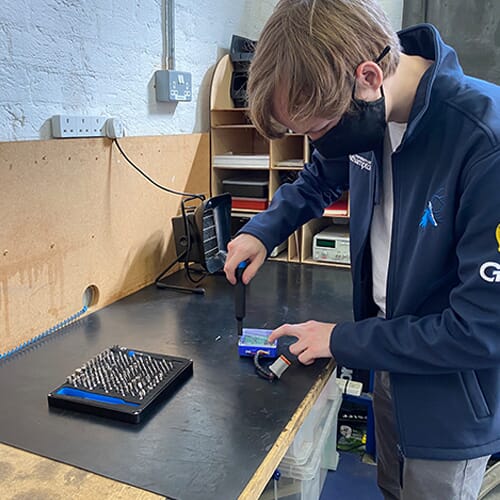 The iFixit tools were perfect for the confined spaces on the car due to their slim profiles – packaging in a race car is always tight to ensure there is no unused space and the car is as light as possible. Evan detailed “The loom spans the length of the vehicle, with sensors and connectors in tight locations, requiring secure and precise tools, which the iFixit Manta kit delivered.”

Balraj commented that “the service from Accu was also a step above what was expected for SUFST. Easy and personable conversations with staff at Accu has always made them very approachable and maintains a family style feel despite the company growing.” Discussions with the Accu team range from technical/ application advice on components, to checks and updates from staff regarding shipping of the parts. As SUFST operated to tight schedules in the build period, they needed to ensure that suitable components were delivered promptly. Balraj added that “it’s really nice to have this kind of experience and relationship with suppliers, we very much appreciated the fast supply of parts from Accu”.

Competing in Formula Student at Silverstone

The efforts of the team came to fruition at competitions in July 2021. In reviewing the events, Balraj comments that “This year we entered two different classes at Formula Student UK, the Concept Class in which we showcased our design for the 2022 electric vehicle challenger, and the Formula Student Class where we took our combustion vehicle to SIlverstone to compete in person with other cars.”

“We used the Concept Class to gain feedback from industry experts on how we could improve the design before manufacturing our electric racecar.” On SUFST’s first ever entry in this competition, they were delighted to place third in the Engineering Design Event. Balraj added, “as the door closes on the combustion chapter, the potential in future electric vehicles certainly looks promising.” 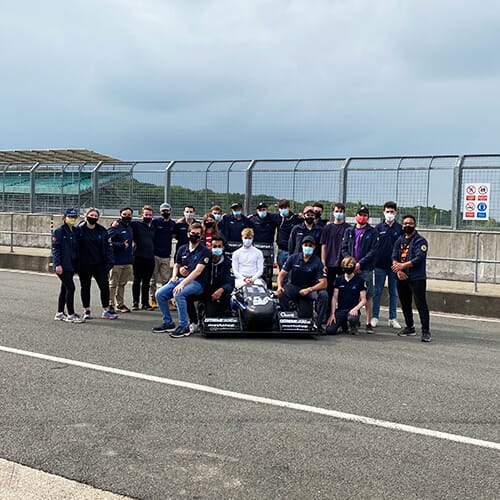 “At Silverstone our 25 strong crew overcame early setbacks in scrutineering to complete the single lap ‘sprint’ event and finished the endurance section, the first time they have completed this event on home soil. An incredible showing after a tough two years saw the team come fifth overall and second in the returning vehicles category!”

Most importantly however, SUFST continues to learn and enjoy the experiences offered in this engineering challenge. It is a great way for team members to work together and put their engineering and management skills to good practice, making friends and building working relationships for their future engineering careers.

With placements at teams such as Mercedes and graduates going on to start their careers in F1 with the likes of Williams Racing, the future of engineering looks bright for SUFST.

Special thanks to the writers of this article: