What Is Linear Motion?

Linear Motion is typically defined as the natural motion of an object, travelling along a straight line. It is one of the most basic forms of motion, mathematically described using a single spatial dimension. Motion that occurs along a line is called translation, whereby all points of a moving body are uniformly travelling in the same direction. A general example of linear motion is a car travelling in a straight line along a road.

What Is Rotary Motion?

Also commonly referred to as circular motion, rotary motion is a type of physical motion that occurs when an object spins, or rotates, on an axis. Using the example of a car again, whilst the vehicle itself is travelling in a linear motion (i.e. backwards or forwards) the wheels are demonstrating rotary motion as they rotate around an axis. Following the advent of desktop manufacturing, such as 3D printing, people are closer than ever before to objects and products containing these precise mechanical components. The main options for Linear & Rotary Components that facilitate accurate motion, in most applications, are leadscrews, belt drives and gears.

These options all offer different strengths and weaknesses, such as cost, positioning speed and repeatability. Below is a brief overview of these components, their common uses and links to further technical information.

Leadscrews, also known as power screws, are a motion control component used to convert the rotational motion of either the nut or screw into a linear motion. As Leadscrews translate rotary motion into linear motion, this is why they are often referred to as translation screws.

Commonly used in robotics and hobby machinery, leadscrews are suitable for applications requiring accurate motion or high loads to be transferred. Similar to standard nuts and bolts, Leadscrew Nuts and Leadscrews use a helical thread design, albeit with a thread form that is designed to transmit force rather than fasten parts together.

Leadscrews are available in a wide variety of sizes, with a range of lead values offering varying levels of motion for one revolution. The lead of a leadscrew is defined by the pitch of the thread multiplied by the number of thread starts. Here, the pitch is defined as the distance between the crests or peaks of 2 adjacent threads, whilst starts are the number of ‘teeth’ or independent starting points on the screw itself.

Thanks to these range of values, leadscrews can be specified for both high torque, low speed applications and high speed, high precision applications. A contrasting example of these different applications would be comparing the leadscrew used within a bench vice, to the leadscrew operating in a DVD Drive Reader Head.

The main disadvantages of using a leadscrew system are higher cost, compared to other solutions such as a belt drive system, and backlash; the amount of play between mating components within a mechanism that can cause free movement that results in lost motion.

Our article on Leadscrews & Backlash looks into this in further detail and offers solutions to prevent backlash in leadscrew systems. 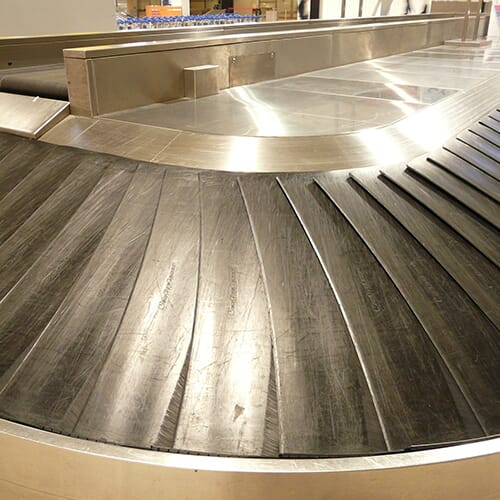 In machinery, Belt Drives are typically composed of a pair of pulleys connected by a flexible, circular band (belt). As a generalisation, they work by transmitting rotary force from one location to another, for example in the speed reduction of a drill press.

Belt Drives are used in a diverse range of products, from consumer electronics to automotive applications, being capable of transferring rotary motion over long distances. Typically they are lighter, quieter and operate more efficiently than Gears, whilst also offering a more cost effective solution.

Belt drives are often used to replace gear trains, in applications where the force must be transmitted either over a long distance, or through a complex path such as the cam belt in an engine.

Another real world example of a Belt Drive would be a conveyor belt, an application where 2 or more pulleys move a belt that is designed to carry a load continuously between two points.

Belts are a low maintenance device and providing the correct tension is kept, they require little to no attention until reaching the end of their service life. V Belts are designed to transmit greater loads than flat belts, however they still have a tendency to slip under high loads. As a result, this led to the development of synchronous belts, otherwise known as Timing Belts, which quickly became a popular choice within hobby robotics and in vehicle drive mechanisms.

This type of toothed belt can accommodate higher motion speed, due to their direct drive nature, though at the sacrifice of lower precision. This lends them to being best suited for low-torque, high speed movements. The presence of low backlash has led to their adoption in laser cutters and other low-load motion applications. The design of gear teeth has evolved greatly in recent years to ensure the pitch circles - the hypothetical circle running directly within the profiles of the gear’s teeth representing the point whereby motion is transferred through the gear system - of meshing gears operate smoothly, without slipping during rotation.

An example of where gears may be found is a clockwork mechanism, where Spur Gears are used to transfer power from a wound spring to the powered features. The high efficiency of a spur gears' design allows for this energy to be transferred with little loss of power.

A gear train is a mechanical system consisting of two or more intermeshing gears, designed to work in sequence to transmit rotational motion. The input gear, or ‘drive gear’, transmits power to the output gear (the ‘driven gear’) by rotating it in the opposite direction. This is often under the influence of a power source, such as an engine or a motor.

Gears are typically circular, with the teeth being present on the outer diameter of the wheel, however Internal Gears feature gear teeth within the internal diameter. This type of gear is commonly used within a planetary gear system, typically found in applications such as gearboxes requiring high levels of torque and speed reduction, but where space is limited and weight is a critical consideration.

A Gear Rack is a straight bar with cut teeth on one side, designed to allow gears to mesh. Commonly known as a rack and pinion system, these components work together as a simple linear actuator, transferring rotational movement into linear movement.

For more information on Accu’s range of Gears and gear fundamentals, please see our Introduction to Gears article.